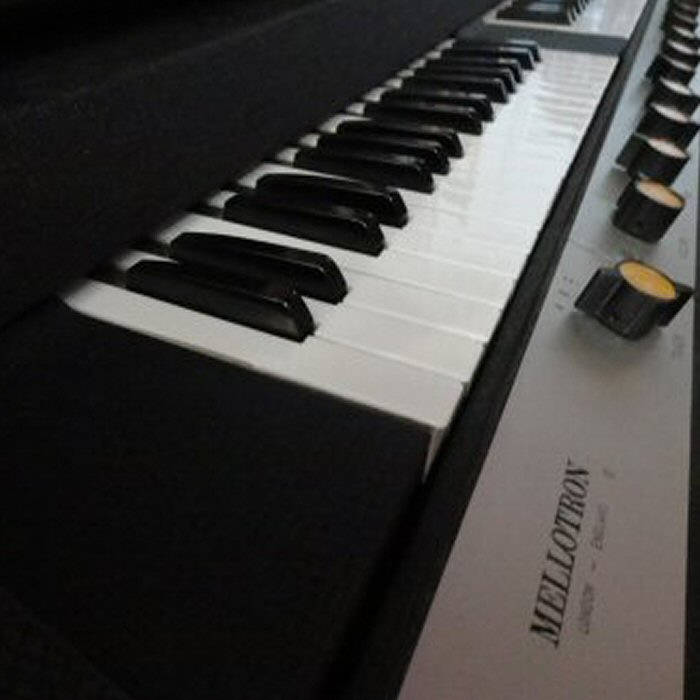 Four years ago I released mellotronworks and was actually quite astonished at the amount of praise and interest that it generated. I was always under the impression that what I was doing was a minority thing and might be of a bit of interest to a few friends and other Mellotron enthusiasts, a group within which I quite clearly number myself.

I was quite wrong. To date, The album has been downloaded over 7,000 times from my web site and has been reviewed, discussed and (to my amazement) played on the radio several times. I have also been interviewed about it and regularly field e-mails from people all over the world asking when are we getting more?

So here it is.

One thing that has changed since the release of mellotronworks is that I managed to acquire a beautiful Mellotron Mk V in the intervening time. This gorgeous instrument - one of only thirty built, I am reliably informed - is a close relative of the M400, with the ability to take tape frames of three sounds. However, where it wins is that it has a double manual keyboard which means that it can have six sounds loaded at any time, with any of the three sounds on one frame in any combination with the three on the other. Not only does this mean less tape frame swapping, but it also means that you can play two sounds on the one recording, if you wish. (Actually you can play four if you interpolate the voice selector switch between tracks, thereby getting enough crosstalk to pick them both up at the same time)

One other huge advantage to the Mk V is that the touch on it is incredibly light, and doesn't have the same issues of the Streetly Struggle so prevalent on other machines I have played, where substantial downward pressure on each key is required to engage tape, capstan, roller and pad all at the same time, approximately. On the Mk V it just happens, and happens fast. Whereas on the M400 I had to previously play havoc with the tape and recording speeds to mimic fast runs, on the Mk V it can actually be done. There were far fewer occasions when I had to resort to any kind of trickery with the Mk V. An even greater blessing is that the Mk V is incredibly quiet, and has tone controls that actually do something. This means that the mains hum is very very low, and the tape hiss can be rolled off easily without losing any real punch of the sounds. This further means that the use of noise reduction systems can be minimised. I use Adobe Audition which comes with a first class noise reduction system, but even that isn't good; noise reduction is subtractive after all, and the less of that the better.

Having sung the praises of the Mk V, it's not as though the M400 has been completely left out of the event. Some of the recordings were made before I bought the Mk V - thereby accounting for some of the differences in the recordings you can hear - but some required that the pitch of the instrument had to be altered, usually by attacking the knob on the motor control board. Unfortunately, the way to this on the Mk V is from the back panel (which you have to unscrew), and since my Mk V sits in a marble fireplace and weighs a couple of hundredweight I'm not about to even try this. The M400 has a handy front panel that is held in with a nylon screw which makes the whole process much easier.

Another acquisition has been an octave divider, a device that allows you to play a note and at the same time produce the note an octave above or below it. This reduces the number of overdubs required, which again cuts down the rapid accumulation of noise from tapes and general analogueness. I also managed to shovel the Mellotrons through flangers and chorus pedals to beef them up a bit.

On that front, one major improvement since mellotronworks is the fact that there is a new sound available in the library, being the Wilden Church Organ. A far cry from the blood and thunder of the St John's Wood organ, this somewhat mellower, reedy sound has a very pleasing bottom end to it, and sounds even better when sent through the divider. This gives a proper bass sound, something that the Mellotron only had fitfully from either the old cellos and string section, or the newer recordings of Taurus pedals which would sound very out of place here.

On the subject of voices and sounds, I confess that I have not been the purist I once was. On mellotronworks, when it came to sounds unavailable in the Streetly Library, I either exchanged it for another (don't have a tuba? drop the pitch of the GC3 brass and take out the top end EQ) or played with the timbres through various effects until I got an approximation. However, one a couple of occasions on mellotronworks II this wasn't possible. A couple of the tunes call for a harp, and there is nothing in the library that even sounds remotely close to it. Worse, two tunes call for a piano, and there is one in the Mellotron library. However, it (a) obviously has no touch, (b) sounds lousy, (c) was horridly recorded and hence (d) I don't possess it in my tape frames. So the decision was made to use a digital piano instead, and it sounds so much better for it than that. The harps are supplied through a sampler and lend the recordings a light touch of what seems to be instant sophistication. (There are other sound effects here and there on the recordings, including one tune that has the sound of aeroplanes, church bells, morse code, a british politician, fireworks and cheering)

I had to choose what recordings I wanted to put on the album. A couple - such as the Fauré and the Copland - were recorded previously and were dumped because I couldn't get them to work. Better hardware and (in one case) a better Mellotron voice allowed me to revisit them and hopefully nail them both. I had to include something by Arvo Pärt, but I found it hard to decide and in the end found that incorporating three different pieces was the way ahead. In all candour I could have made that number twenty three. I just adore his music. I make another attempt on Vaughan-Williams (albeit with a piece substantially easier to play than the last one) and I embarked on an ambitious idea to record the whole of the fourth movement of Beethoven's most celebrated work, but in the end found that some of the shadings that make it a masterpiece just escaped the abilities of both man and machine, so I settled for a small part of it, being the most famous tune he ever wrote instead. Elgar was difficult, but not more than Ravel, which is maybe as tricky as anything I had ever done before, despite all the repetition in it.